On August 25, 1964 Robert (Bobby) Kennedy announced his intention to run in the race for Senator of New York State from his podium at 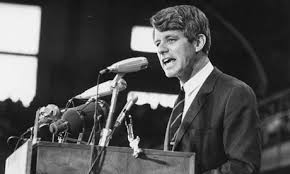 aGracie Mansion. Later that year, on November 3, Kennedy won his bid against Republican incumbent Senator Kenneth B. Keating. Many said that Kennedy’s term as Senator was a stepping stone to the presidency of the United States.

Before his tenure as New York’s senator Kennedy served as his brother John’s campaign manager when he ran for president in 1960. After John’s successful campaign Bobby served as John’s attorney general, and also became one of John Kennedy’s closest advisors. After the tragic assassination of John in November 1963 Bobby resigned his post.

At the Democratic convention in 1968 Bobby was chosen to be his party’s candidate for president, beating out Eugene McCarthy for chance to run. Later that year, in June, Bobby was gunned down in the Ambassador Hotel in Los Angeles right after delivering his victory speech upon winning his party’s primary election.

Sadly, Kennedy’s youngest of eleven children was born 6 months after his murder.