The Shapell Manuscript Foundation, an organization working to display history in its original form, collects rare documents, manuscripts and letters from American presidents, international leaders and other prominent historical figures.

The foundation recently released its newest collection, which includes a handwritten passage from Mark Twain’s soliloquy at the Tomb of Adam, as well as President Franklin D. Roosevelt’s original plans to settle refugee Jews in Venezuela in 1938.

Mark Twain’s transcript, which was written in November of 1870, read as follows:

The grave of Adam! How touching it was, here in a land of strangers, far away from home, & friends, & all who cared for me thus to discover the grace of a blood relation. True, a distant one, but still a relation. The unerring instinct of nature thrilled its recognition. The fountain of my filial affection was stirred to its profoundest depths, & I gave way to tumultuous emotion.

And here is a photo of President Roosevelt’s document from the White House: 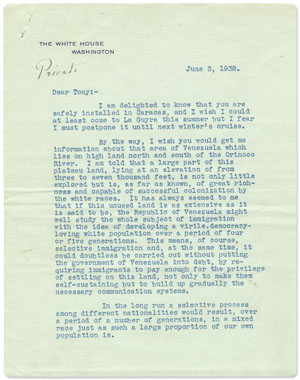