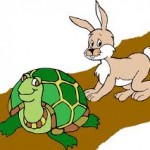 Many people worry that state tests are simply a way to put pressure on kids and to force them to jump through absurd hoops.   More so, they cause teachers to teach to the test, rather than actually teaching students something in the classroom.

How anyone would have taught to this recent test, however, is a mystery. On a recent state exam in New York, eighth graders were completely stumped by an absurd series of questions. In a twist of the story of Aesop’s fable, a talking pineapple challenges a hare to a race.   When the rabbit ends up winning, and the pineapple doesn’t move, the animals that have placed their bets all eat the pineapple!

Students were then asked why the animals ate the pineapple and which animal was the wisest. Huh?

Parents have been in an uproar over the ridiculous questions since the exam was administered. Leonie Haimson, of Class Size Matters, said,

“My reaction is horror that a question that’s so obviously confusing should be used on a test that is going to be used to determine our kid’s future and the future of our children’s schools.”

Some believe that the confusing questions are a result of past criticism that the state exams had become too easy to pass. Last year, the state gave a new, $32 million contract to the testing company Pearson.

Ironically, this isn’t even the first time that this confusing set of questions has been used. As Scarsdale Middle School Principal Michael McDermott said, it has “confused students in six or seven different states.” McDermott had a fantastic answer to the test question when he was asked to give his answer about which animal is the wisest. He replied,

“Pearson for getting paid $32 million for recycling this crap.”

Those in the know, and with the power, have unequivocally refused to comment on the situation. Pearson spokesman Jason Smith has said that the state Education Department has keep them from speaking to the press on such matters; state officials refuse to offer the answers and they won’t say if the questions will be thrown out in the scoring; Chancellor Dennis Walcott told the press that all questions should be directed to the state.