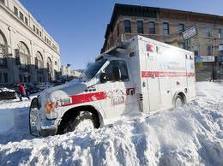 Bringing into sharp focus the critical importance of ambulances which arrive within moments of being summoned, this week’s blizzard left many people without this crucial link to life-saving care which we can sometimes take for granted.

In Midwood, Brooklyn one woman had to wait for her ambulance 6 hours. When she finally did arrive at the hospital it was not without signs of severe, advanced brain damage. In another case in Forest Hills, Queens, pedestrians waited with an unconscious man for three hours in the snow until they finally flagged down some assistance. In another part of Brooklyn a laboring woman called 911 at 8:30 in the morning. When the ambulance finally came at 6pm it was too late for them to save her baby.

Dispatchers at 911 did triage to assess the seriousness of each call, but even the most serious cases had to often wait long amounts of time until help arrived. More than 200 ambulances were stuck in streets that had not yet been plowed, and problems were magnified by cars which had to be abandoned as the snow piled up.

At one point there were at least 1,300 back logged calls. As the situation came to a critical head an unusual directive to ambulances was released: if a patient did not respond to treatment after 20 minutes, a supervising doctor should be consulted to determine whether the ambulance crew should give up. Although 20 minutes is almost always enough time to revive someone, the usual policy is to let the crew make the decision when to give up.