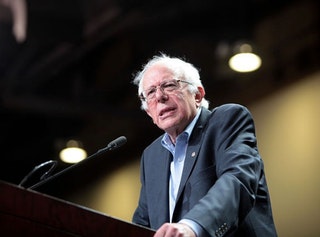 Its déjà vu all over again as Bernie Sanders, 2016 Presidential candidate wannabe, kicks off his second bid for the highest office in the land for the coming 2020 elections. And where else should his launch take place but Brooklyn, New York, the place Sanders says he was “born and raised.”

The party started on Saturday at Brooklyn College where, according to last week’s tweet he showed “Trump and the powerful interests what they’re up against.”

In 2016 Sanders motivated thousands of followers to attend huge campaign rallies all over the country, despite analysts predicting Sanders’ chances of nabbing the Democratic nomination as miniscule. In the end they were right, and Hilary Clinton was chosen as the Dems candidate in 2016.

Sanders announced his second run for his party’s nomination in February on Vermont Public Radio, where he is a Senator. During his announcement he called President Trump a “racist, a sexist, and a homophobe,” and promised to take the enthusiasm he garnered in 2016 with him this time around and go even further.

“What I promise to do is, as I go around the country, is to take the values that all of us in Vermont are proud of — a belief in justice, in community, in grass-roots politics, in town meetings — that’s what I’m going to carry all over this country,” Sanders said.

“We began the political revolution in the 2016 campaign, and now it’s time to move that revolution forward,” he added.