In an exciting escape story which immediately brought to mind the escapades of the Bronx Zoo Cobra, a peahen went missing on Monday, also from the Bronx Zoo.

In the case of the cobra, which was missing for seven days, she finally turned up not too far from home, or rather in her home in the Reptile House, only not in her cage. During those seven days, when no one knew for sure where she was, the cobra seemed to have morphed into a rather computer savvy, city-wise, girl-on-the-go, constantly sending tweets on her Twitter page informing the large and constantly growing number of her followers about her whereabouts around the Big Apple. Despite the fact that she is now safely back in her cage, the Bronx Zoo Cobra is still tweeting to a total of 242,427 followers. Her last tweet as of this writing was to the missing peahen, “Seriously, peacock!? We agreed we’d go tomorrow at dawn! RT @nydailynews: Female peacock escapes from Bronx Zoo http://nydn.us/iIVbQg” 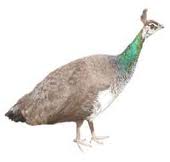 The escaped peahen, in contrast to the cobra, is a harmless bird whose ancestors have been roaming freely throughout the Bronx Zoo since the 1920s. The two-year old peahen, which is the female version of the famous male peacock, easily found her way out of the zoo. According to the zoo’s director James J. Breheny, “It’s not surprising if one ventures outside, but typically they come back on their own.”

The peahen was seen walking down some pretty dangerous streets in the Bronx “where a car almost hit her” according to one of the men who helped catch the bird. As the peahen approached an auto-glass repair shop on East Tremont Avenue, less than one mile from the zoo’s perimeter, Edison Matos, the owner of the auto shop, decided it was time to catch this bird.

“I said, ‘You go on this side, you go on that side and I’ll come at it from the front”™ ” Mr. Matos explained.

Mr. Matos called the zoo to tell them he had found and caught the errant bird.

“I went over there, really just to check and see if the tip was true or it was a prank” Mr. Breheny said. “I walked in, saw the bird, scooped it up with one hand and got in the car. I held her in my lap.”

The peahen was checked for any damage done during her three day adventure, but she looked “no worse for the wear” according to Mr. Breheny.

When asked if perhaps the birds should not be allowed to roam free in the zoo, Mr. Breheny’s response was unequivocal.

“We will keep our tradition of free-roaming peafowl” he said. “We are confident that after this peahen’s recent adventure, she won’t want to wander from her home at the zoo.”