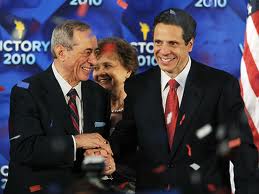 Twenty seven years ago the elder Cuomo was first sworn into office, and it has been 16 years since he departed from New York’s highest office after serving three terms. Mario Cuomo’s face shown with pride and joy as his son took the oath of office, soon after which the father and son shared an intimate moment of a hug, kiss and a playful slap on the arm.

Mario Cuomo was enthralled with his son’s inaugural address delivered on Saturday evening. “I don’t even remember being in the mansion last night. All I can think of is the speech he just gave. He could not have done it any better, and I’m not sure he’ll ever be able to do it any better than he did today.”

In the younger Cuomo’s speech the new Governor paid tribute to the work of his father and emphasized the era in which he toiled and the legacy which he has left behind. Andrew Cuomo reiterated the role his father played during a time of great seriousness and purpose, taking New York and its citizens on a journey which he, Andrew Cuomo, hopes he can live up to.