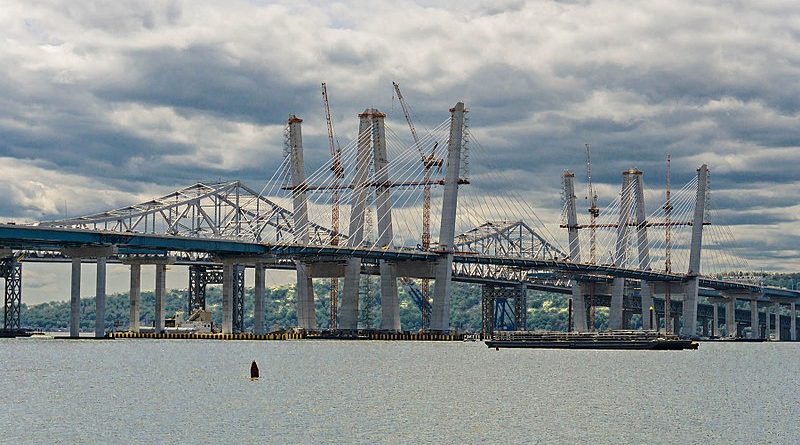 The Governor Malcolm Wilson Tappan Zee Bridge is about to be no more. Construction began on the cantilever bridge which spans the Hudson River at one of its widest points, in 1952. It was opened to traffic in 1955 and shut down permanently in October 2017.

Cars were diverted to the new Governor Mario M. Cuomo Bridge, or more commonly, the new Tappan Zee Bridge in October 2017, while dismantling of the old bridge commenced immediately.

It was originally hoped that the entire bridge could be taken down piece by piece without the need to resort to explosives, but the structure was considered unsound, so it was decided that the bridge would be demolished using explosives. Traffic is expected to be stopped for a bout one hour during the demolition.

After the mayor of Grand View-on-Hudson spoke with the consortium hired by the New York State Thruway Authority, Tappan Zee Constructors, he was able to reassure his constituents that the village would not be adversely affected by the explosives.

“It’s not like they’re setting up explosions down in the bedrock,” Mayor Larry Lynn said. “The whole thing will be over in 30 seconds. It sounds like the explosive activity is so minor there are no seismologic implications. That was my main concern.”

The explosives will be detonated above the water’s surface and will essentially act like a cutting torch. The explosions will create enough heat to cause the crumbling of the steal pillars, causing the bridge to crash into the river.

The eastbound span of the new, $3.9 billion bridge, named for the father of Governor Andrew Cuomo, was inaugurated at a celebration on September 7, 2018.

The last bridge to be demolished by explosives in the New York area was in October 2017 when the Kosciuszko Bridge between Queens and Brooklyn was torn down.