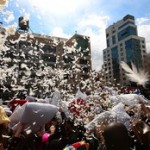 If you weren’t, you certainly missed out. Saturday in Union Square Park marked the sixth annual New York City Pillow Fight, in honor of International Pillow Fight Day. Thousands of people attended this flash-mob event that was organized by a group called Newmindspace, mostly represented by teens and 20s.

The rowdy event, a dream for nearby Bed, Bath & Beyond, began at 3 p.m. and by 5 p.m. police had accessed that, so far, there were three broken noses and three stolen wallets. Police began breaking up the festive event, but a number of feisty pillow throwers weren’t giving up. As one policeman commented, “You’d have people staying all night if you didn’t stop it.” By 5:30 p.m., police had finally encouraged all fighters to put down their pillows and walk away.

And then, of course, the clean up began. Five poor cleaners from Union Square Partnership were left with the task of scooping up pillow stuffing, half torn pillows and more with their snow blowers and with the help of volunteers. 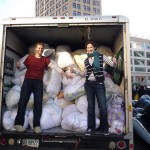 In a lovely show of resourcefulness, Pillows for Puppies was on hand to collect discarded pillows for donation to animal and homeless shelters in Brooklyn and the Bronx. Pillows for Puppies deployed fifteen volunteers, known as Pillow Agents, around the event to collect and bag pillows that were tossed aside. Jennifer Small, the group’s leader, said that last year they collected 1000 pillows and that they expected to collect 1500 this year. As Ms. Smart said, “I think there’s a lot of room in the flash mob to evolve into something more effective for the community.”