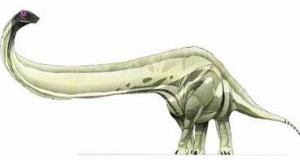 The American Museum of Natural History staff has been working for over two years on its newest exhibit entitled “The World’s Largest Dinosaurs.” The star of the exhibit is a Mamenchisaurus, a life-size replica of a female sauropods created by more than one hundred people. The figure is eleven feet tall and sixty feet long, and some sauropods grew to be even twice that size! The size is not the only incredible aspect of the model, though.

“It’s made in the way those old invisible human models used to be. One side of it appears as the way the animal would have looked in life. But on the other side, the skin is pulled back to reveal muscles, bones, organs and the mechanics of the inside of the animal and how it worked.”

“We actually animate a lot of the internal organs by projecting on the outside of it, so that we can talk about the different layers of anatomy, and see things like the lung work and heart beat and food passing through the animal” he continued. “So it’s a very dynamic, lively sort of thing.”

The model is made of polyurethane, a synthetic material generally used as packing foam. Norell explained: “We constructed it by sculpting a small version of it about 6 feet long. Then it was laser-scanned, and molds for the full-size model were then prototyped off of that.”

The sauropods were herbivores, which means they reached their massive size by eating only plants. The model at the exhibit shows how that could be possible- an issue that many experts have debated for years. Other questions that experts are currently researching are how long did they live, how long did it take to grow, how much food they needed to consume, and how big their eggs and babies were. Today, the elephant needs to eat for at least 18 hours every day in order to maintain its size- imagine how much a sauropod would have to consume!

Norell said, it’s “not just those facts, but how we were able to figure this stuff out, is really the force behind the exhibit. It goes through the process of discovery and why we think we can calculate these numbers like the heart beating only a few times per minute.”

Mamnchisaurus is not the only replica featured at the exhibit. Another sauropod (or, the head and neck of one) will welcome the guests at the entrance to the exhibit.

Norell revealed that “It will be peering at you through the forest. It’s the largest land animal that we know of right now.”