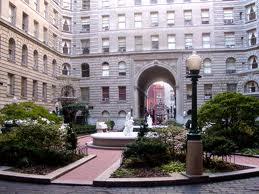 Sometimes the grass is just as brown on the other side of the fence, too. New York apartments are famous for their lack of services; too little heat; broken doorbells; mice and roaches. But us regular folk always assumed this was due to rent control and us being the plebeians in a city full of noblemen living the good life at some of the more prestigious addresses on Fifth Avenue and elsewhere.

In one of New York’s more regal apartment buildings, built in 1908 by the Astors, the Apthorpe, service isn’t much better there. The building has high ceilings, detailed woodworking and other indications of its Renaissance Revival style which was popular at the time it was built. Many notable tenants have lived in the Apthorpe, including Joseph Heller, Nora Ephron and Cyndi Lauper who succeeded in her lawsuit to get her monthly rental rate lowered according to the rent control laws of the time. Nevertheless, the building has problems with mice, roaches and heating.

The building was purchased for $426 million in 2006 by developers who have been converting the building into condominiums. The conversion has been contentious with fighting not only with longtime renters but among the investors themselves. Some apartments have been renovated and asking prices for them have been anywhere from 2.6 million dollars to 7.8 million dollars.

At those prices you would expect a bit of heat in the winter and no mice, wouldn’t you?