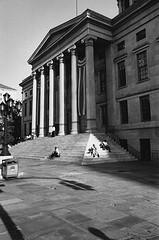 Looks like Brooklyn will be able to preserve its skyscrapers after all.  While the plan still needs to be approved by the full City Council, the landmarks subcommittee just voted 4-0 to approve of the preservation plan.

He continued, “It is now marked by really tall buildings, and there are going to be more really tall buildings that are all very modern. These buildings along Court Street are early skyscrapers; they were built in the ‘20s. They defined Brooklyn’s skyline for the last 80 years. As the new ones come in…there’s really a risk that at some point these buildings would be dismantled [and] the skyline of Brooklyn would be gone.”

The Real Estate Board of New York, however, has been blazing ahead with an attempt to stop the Borough Hall Skyscraper Historic District plans, which would cover 21 buildings in the neighborhood.  They sent out thousands of mailers explaining why the plan is a terrible one.  Showing an unimpressive building on Court Street, the mailings ask, "This is a landmark?"

The flyer agues that, “Landmarking will send costs skyrocketing for local residents and business owners. In these economic times, when every dollar counts, landmarking threatens to send Court Street back to the ‘bad old days’ of empty storefronts and dirty streets.”

REBNY president Steve Spinola also opposes the landmarking, saying, “This landmark designation will add millions of dollars in additional costs to property owners and retail tenants. That is an extraordinary burden to place on property owners at a time when the district is already experiencing a 17-percent commercial vacancy rate. This is another case of the city landmarking away its economic future.”