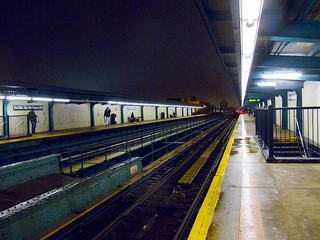 Jay Ruiz and his band of Brooklyn Bikers is making a huge impact.   After a row of sex attacks in Park Slopes last year, Jay and a few other men started walking women to their homes at subway stations. Now, they work at 38 subway stations from Borough Park to Williamsburg and beyond.

Last month, after someone was raped at the Dekalb station, they added the Bedford and Dekalb Avenue stops on the L train to their locations. As founder Jay Ruiz explains,

And so, one bicycle at a time, they are making a difference for women in the area.   Today, Ruiz’ Brooklyn Biking Patrol has ID badges, NYPD background checks, matching jackets and t-shirts so that women coming out of the station will recognize them. He says that they have 73 women who are repeat customers and 11 male volunteers.

The biking volunteers usually operate until midnight during the week and until 3am on the weekends, but they’ll even work later if someone calls. As one woman said,

“I work in TV production and sometimes there’s really late hours. When I’m coming home after 10 p.m. I felt like I’d rather be safe than sorry, so I’d call Jay. Because I’m pregnant, I’m feeling particularly vulnerable…so I just want to take those extra precautions at this point.”