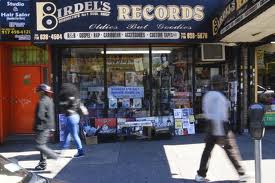 Birdel’s Records is one of the last places left in New York where you can still find records; you know, those big round black flat circles that play music on a ‘record player?’ Unfortunately, if you do want to see what a record is, other than in a museum, you will need to get down to Bedford-Stuyvesant in Brooklyn where Birdel’s is this week, because next week the iconic record shop will be closed.

Joe Long, the owner of Birdel’s says he is really closing up his shop, which has been around since 1944. Two years ago he tried to close down, but the neighborhood wouldn’t let him. So despite the downturn in the music industry which reflected in poor sales in his store, he decided to keep the store open a bit longer and see what would happen. Unfortunately, nothing much different, so now Mr. Long is posting signs that the store is closing this Friday, and his entire inventory of records, including 100,000 singles and 10,000 LPs from the 50s, 60s, 70s and later is up for sale for between $25,000 and $30,000.

Mr. Long began working at Birdel’s in 1957, and became the owner in the latter half of the 1960s. Now that the store is really closing down Long says that he will enjoy his retirement. He plans on traveling; to North Carolina first to visit family; then to some far off lands like Aruba or Ghana.

Some in the neighborhood just can’t bear to see Birdel’s close. “When I saw that sign, I said, ‘He ain’t going nowhere”™” said Bernice Layne, 60, who has been shopping at Birdel’s since 1963. “God has a way of working out miracles.”

Mr. Long disagreed. “Yes he does, but he ain’t going to work one for me.”