It was an important day in New York on Tuesday, as 47 police officers were honored at the NYPD’s Medal Day ceremony. Thirty officers received the Police Combat Cross which is the department’s second highest honor. The highest NYPD award, the Medal of Honor, wasn’t awarded during the ceremony, but ten service members who died of illnesses they contracted during the 9/11 rescue operation were awarded the Distinguished Service Medal posthumously. 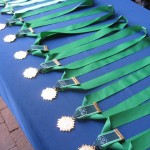 The third-highest honor, the Medal for Valor, was awarded to Det. Raymond Clair and Patrick LaScala. As two bomb squad detectives, they defused a car bomb during a botched terror attack that occurred last year in Time Square.

As LaScala said after the ceremony,

“You rely on your training. You can’t think of anything else but what you see in front of you. You can’t make up things in your head. We saw what we had. We knew what we had to do.”

The bomb was created by Faisal Shahzad, who is now imprisoned for life. LaScala said, “It was just a great job by the NYPD and a proud moment for the bomb squad.”

More Honors All Around

Out of the thirty cops who received the Police Combat Cross, two were Det. Ricardo Ramirez, who was shot three times in a Brooklyn gun battle last year. Two others who were honored were plainclothes officers, Radoslaw Terepka and Brian McIvor, who had been on patrol with Ramirez that night. Ramirez was shot three times during a gun battle last year and it only ready to return to work now.

At the ceremony, he said, “It’s been a long road for me – just learning how to walk all over again. I’m eager to return and do my job again.”

During the incident last year, Police Officer Radoslaw Terepka charged the suspect and fought with him until backup arrived, while Officer Brian McIvor saved Ramirez’s life by applying a tourniquet to his leg wound, using a collapsible baton and Ramirez’s belt to do so.