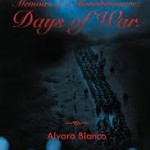 Not many 17 year olds can put “author” on their resume.   Alvaro Blanco, however, can.   This self-published author just completed his first 144 page science fiction book. And the most impressive part of the feat is that he didn’t even know English when he arrived from Bogota, Columbia.

Today, the Bath Beach resident has even surprised himself.   As he said,

“I never planned on writing a novel. I just wrote one page and then another and then it just sort of turned into this.”

The book details a soldier’s fight against an alien invasion 300 years from now.

Blaco’s mom, Coney Island Hospital nurse technician Luz Eckmier, is enthusiastic about her son’s efforts with “Memoirs of a Revolutionare: Days of War.” She remembers that he would jump up from the dinner table when he had a new idea, and run off to incorporate it into his story.

Blanco is now hard at work on the next installment of his trilogy.   And he says that, “I have about 10 or 11 other book ideas in my head. All I have to do is write them.” He’s juggling a full load at the High School for Economics and Finance in Lower Manhattan and he recounts how he spent two hours a night working on his English with his step father when he first arrived in the States.

Hours that have definitely paid off now.