If you love “Gossip Girls” then you probably love The Empire Hotel. Too bad that everyone doesn’t seem to love it. The hotel is embroiled at the moment in a battle with its neighbors over the noise that comes from its very popular rooftop bar. The Empire Hotel, which is both a real NYC property and part of the fictional empire on CW’s “Gossip Girl” is not sitting pretty today.

Last week, in a decision by the Appellate Division of the New York State Supreme Court, the co-op located at 61 W. 62nd Street has the right to issue a temporary injunction with a stipulation about the amount of noise that the bar can make.

The co-op in question overlooks the hotel at 44 W. 63rd Street and has to endure a good deal of noise from the hip bar. The conflict all began in 2009 when the co-op residents complained that loud noises and music were keeping them up as late as 3:00 am and they asked that bar patrons not be allowed to use the outdoor areas. 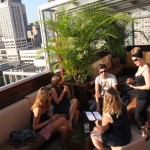 At the moment, in a sign of civility in NYC, the co-op and the bar are trying to reach a settlement together so that the co-op doesn’t have to activate its injunction. So far, the bar has reduced its noise level and the co-op board has asked them to soundproof the space and to put up the retractable roof as a set time each night.

The sticky point at the moment is those outdoor events that the bar sometimes holds — they aren’t willing to give those up just yet.

Time will tell how civilized these New Yorkers will continue to be with each other…and for how long.