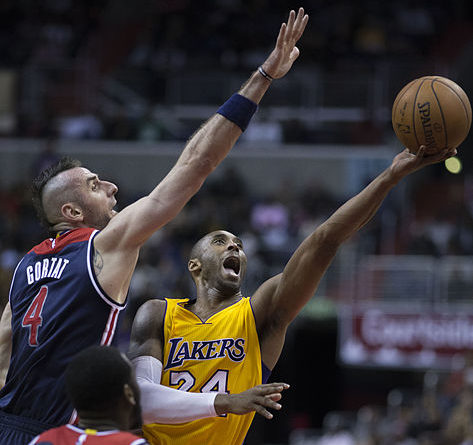 In the wake of the tragic helicopter crash in Los Angeles at the end of January that left 9 people dead, including basketball legend Kobe Bryant and his 13-year-old daughter Gianna, mural artist Efren Andaluz created a mural to remember those killed. The mural was begun soon after the January 26th accident and finished quickly on February 4, 2020.

The mural depicts Bryant reclining on a basketball court, a basketball as his pillow, gazing at the smiling face of his young daughter. The realistic painting has Bryant in his Los Angeles Lakers uniform of blue and gold, the only team he played for during the entire 20 years of his professional basketball career.

The mural is located at the corner of Pacific Street and Flatbush Avenue, directly across the street from the Barclays Center. Andaluz began his search for a spot for his artwork using Google Earth, looking around the area of the sports arena. He also called real estate agents and landlords, and finally found the perfect wall for his tribute. The landlord has offered to allow the mural to remain undisturbed for at least the next six months.

There have been many murals in the Los Angeles area being painted in Bryant’s memory, as far as we know, Andaluz’s mural is the only one, so far, in New York City. Already many people have stopped by to gaze at the beautiful painting and remember Bryant, Gianna, and the other seven who were tragically killed. The completed mural includes all nine names of those who died.