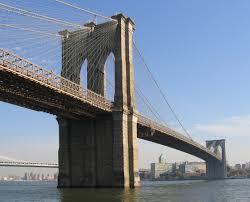 Four Emergency Services Unit detectives climbed 20 feet above the roadway of the Brooklyn Bridge on Thursday to rescue a man who was threatening to jump off.

Detectives James Coll, Sean Mulcahy, Michael Cook and Kimberly Zarrilli donned harnesses and then shimmied up to where a man was perched on the south side of the Brooklyn end of the bridge.

The man had been seen by drivers and pedestrians as he was climbing the steel frame of the famed bridge at about 1:40pm, stopping when he got to a place to sit on one of the bridge’s many stress beams.

When the officers reached the disturbed man they saw he was wearing a towel secured with duct tape over his mouth, encircled him, and engaged him in a discussion which lasted about 20 minutes.

“He said he was an alien from outer space” Coll said. In response another of the detectives asked the man, “What brings you to Brooklyn?” “He said he’s having a bad day and a bad life and he’s had it” Coll said. “He started crying and we were trying to empathize with him.”

During the talk the officers became nervous that the man was going to jump before they were able to gain his trust.

“We were a little worried when he turned his legs to the outside [of the bridge], but then he put his legs back in” said detective Mulcahy.”That was a good time to take him into custody.”

That was the moment the policemen grabbed him. He put up a fight, but finally the men were able to handcuff him and take him into custody. The mentally ill man was brought to Woodhull Hospital to receive a psychiatric evaluation.

“Once he was in custody he said, ‘I wish I had ended my life”™” Mulcahy said. “He’s still emotionally distraught.”