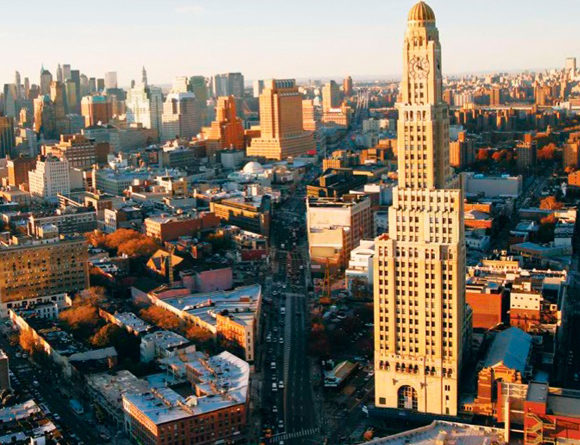 Until 2010 the Williamsburg Savings Bank Tower, with its iconic illuminated clock, at 512-feet-tall, was the tallest building in all of Brooklyn. The

rezoning of Downtown Brooklyn 2004 invited the construction of taller and taller buildings in an attempt to grow the city without encroaching on the already scarce open spaces in the fast-growing borough.

Brooklyn is growing so fast that soon, if it keeps up the present growth-rate, will have as many denizens as Chicago. Since 2010 Brooklyn absorbed an additional 144,000 residents, and a serious housing shortage is in full-blown mode. The question is not if more housing is needed, but where to put more dwellings.

One answer is the 60,000 square-foot block between Boerum Hill and the crowded Flatbush Avenue. There is a proposal on the table now to develop the block with a mixed-use project to be called 80 Flatbush. Composed of two tall towers, the lower stories will be filled with offices, while the upper floors will contain 900 residences. Of those residences, 20% will be set-aside as affordable. Two historic brick buildings will be re-tooled as retail space and cultural usage. The Educational Construction Fund, a group that brings schools to under-used places without the benefit of government money, will build two schools on the site.

The developers are now in a fight to get the zoning rules changed so their buildings can be even taller, so more people can be squeezed into a smaller space. In opposition are some residents from Boerum Hill. They feel the project is not in harmony with the traditional character of their neighborhood. The City Council is considering the issue and should come to a decision by the end of the month.

The project puts in focus the general issue of how a city as dense and expensive as New York can solve its housing crisis and shortage of community facilities. The answer presented by 80 Flatbush is the private sector answer: a larger number of fair-market apartments funding lower-cost units, with also schools, open public space and cultural centers.

“There’s almost no place in the city where when we’re building something sizable there isn’t going to be some concern,” Mayor Bill de Blasio said at a media roundtable on August 23. “But if we can combine a site that has a lot of height density around it with the ability to get a major school facility built and affordable housing, that’s a pretty rare combination.”