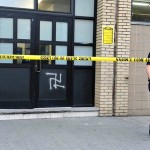 One swastika is a swastika too many — but things in Brooklyn have gotten disturbingly out of hand this week. Swastikas were found in the Orthodox-Jewish area of Brooklyn in a half-dozen locations on Friday.   The police released the surveillance images of two suspects they are after at the moment.

Then, on Sunday night, two more swastikas were discovered.   While the NYPD’s Hate Crime Task Force is investigating, they don’t know yet whether there is a connection between the incidents on Friday night and those on Sunday.

This is not the first time that the Councilman has offered a bounty to get results. As Politicker explained last November,

“Brooklyn Councilman David Greenfield is offering a $1,000 reward for information leading to the arrest and conviction of the people responsible for an anti-Semitic attack on Flatbush. Three cars were torched. Graffiti featuring swastikas. the phrase “Kill The Jews” and “KKK” were also scrawled on benches near the scene.” — Politicker in reference to Brooklyn Councilman David Greenfield.

Let’s hope the bounty helps the community to find these despicable people and to clear the streets of swastikas.