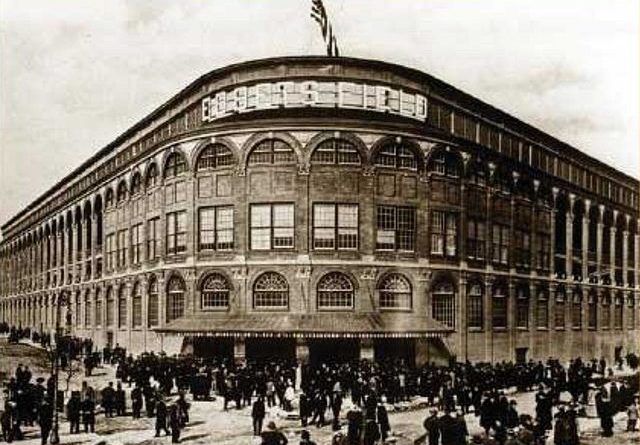 Sadly, for history buffs, Ebbets Field was closed after the last season the Dodgers played in New York, in 1957. In February 1960 the destruction of the field commenced. Thirty-five years after the Dodgers move to Los Angeles, Federal Judge Constance Baker Motley said that Walter O’Malley, the majority owner of the Dodgers had committed “one of the most notorious abandonments in the history of sports” when he took the Dodgers our of Brooklyn.

The contents of the stadium were auctioned off on April 20, 1960, with about 500 people in attendance, all hoping to acquire a bit of baseball history memorabilia. Saul Leisner, the man in charge of the auction, said that day was the saddest of his life, as he had been a lifelong, loyal Dodgers fan.

The area where the field used to be was first the location of the Ebbets Field Apartments, which opened in 1962. In 1972 the buildings were renamed the Jackie Robinson Apartments.

History buffs can come to the area and discover two plaques memorializing the sport’s history that was made there over 70 years ago. Find your way to the parking lot that services the 24-story housing development in Crown Heights, just off Sullivan Place, and look for the sign in the shape of a home plate. The inscription on the grey stone reads: “SITE OF EBBETS FIELD HOME PLATE. HOME TO THE BROOKLYN DODGERS- 1913-1957. AT THIS LOCATION ON APRIL 15, 1947 JACK ROOSEVELT ROBINSON INTEGRATED MAJOR LEAGUE BASEBALL.”

Another sign, located behind a bush under the building address, reads: THIS IS THE FORMER SITE OF EBBETS FIELD. Above the inscription is an engraved baseball with the year “1962” within.

Take a trip to the plaques and experience a little bit of Brooklyn nostalgia down memory lane.