After rejecting two different proposals by city officials, Community Board 13’s parks committee voted 5-to-1 in favor of adding concrete to a small strip of the boardwalk from Brighton 15th Street to Coney Island Avenue.

Residents Protest Use of Concrete

Previously rejected were plans for both a new ‘boardwalk’ made entirely of concrete and another plan using concrete for only part of its construction. Both previous plans were met with opposition from local residents complaining that the concrete has a bad smell, glares in the sun, or is just plain ugly.

“These slabs are hideous,” said Brighton Beach activist Ida Sanoff. “They make you dizzy when you look down them. They make baby carriages and walkers and strollers and wheelchairs shake, rattle and roll.”

But Marty Maher, Chief of the Brooklyn Parks Department, said that concrete is absolutely necessary for vehicles to travel down the boardwalk without causing damage. 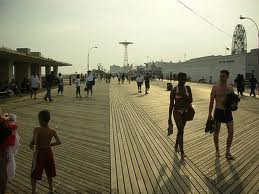 The compromise which the local parks committee finally voted in favor of includes a 12-foot strip of concrete sandwiched between two 19-foot-wide strips of imitation wood. But even this plan was met with vehement resistance, including protesters holding signs and doffing T-Shirts exclaiming “Boardwalk Not Sidewalk.”

“We shrunk that down pretty much as far as we think we can shrink it” said Marty Maher. “There has to be a little bit of reality factored in.”

But the opponents are still not convinced. They claim that city vehicles make unneeded trips on the boardwalk, and that the parts of the boardwalk which already have concrete as part of a testing program have already cracked.

“There should be no concrete on the Boardwalk,” said Brighton Beach resident Bruni Figueroa.

“All of the slabs in the finished section, all of them have cracks, each and every one of them, and the cracks are [getting] bigger,” Figueroa added. She also noted that city vehicles “are racing up and down the Boardwalk, and since the concrete has been put in, they’re going even faster.”

Yet, despite the problems and objections, the parks committee voted for the plan:

The compromise project will cost an estimated $7 million, and includes for now just the eastern part of the boardwalk stretching from Brighton 15th St. to Coney Island Avenue. This phase is hoped to be completed sometime in 2013, and will be used as the design for most of the rest of the famous boardwalk when it is eventually rebuilt, as it is in an undeniably serious state of decay today.