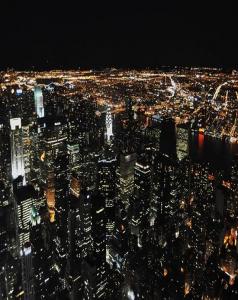 On Sunday, November 7th, Doris Bryant Makas paid a visit to the six-story home of Michael and Marjorie Loeb in New York City. Makas is a strong, 100 year-old woman who grew up in Provincetown, Mass, close to where the artist Charles Webster Hawthorne painted and ran an art school. When she arrived, she admired the enormous painting hanging at the stop of one of the stairwells and said “Yeah, that’s me.”

The painting is one by Hawthorne called “Motherhood Triumphant” and depicts a woman wearing white holding a toddler in a bonnet on her lap, and a backdrop of a fishing town. The only thing known about the painting before this meeting was a vague description of “circa 1915”. A journalist named Joshua Prager was the man to discover that the baby model in the painting was still alive and living in the U.S.

He recently bought the Hawthorne barn last year, and while visiting it this summer ran into an acquaintance of his who mentioned that his Aunt Doris had modeled in the barn as a baby. Excited, Prager got in touch with Doris’s daughter Elaine, and organized an interview with them in the old barn. The visit was publicized in a local paper along with a picture of the painting, and the article was noticed by David Parker, a New York City architect. He recognized the painting from one of his client’s houses, and sent the article on. Prager soon received an email from a Mr. Loeb saying “Interestingly, the painting in the photograph hangs proudly in my house” and inviting Doris Makas for a visit.

On Sunday, Makas traveled to New York, and brought photographs of her mother, who did resemble the woman in the painting. Makas and Mrs. Loeb compared stories and described what the painting meant to each of them. Makas stated that it reminded her of the harsh life her and her mother, Mary Anne Bryant, endured in Provincetown.   Mrs. Loeb explained that she “had just gone through a rigorous situation, having three babies at once… I loved the title and I said, ‘I just had three babies – I’m motherhood triumphant.’  ”