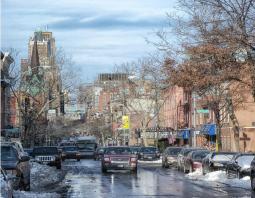 Bingo is one of the more bland forms in which legalized gambling takes place in New York City. Despite its slightly boring quality, worse odds and winnings, Bingo still attracts a following among New York’s older working classes. The following is rather small, and now there are only 10 commercial Bingo halls left in the city where once there were several dozen.

Nostrand Bingo Hall is one of those “enduring relics of the fading game” found in the Midwood section of Brooklyn. But just because Bingo might be boring or for the older set does not mean it can’t keep up with the times. Computers can be a useful aid to real enthusiasts, allowing one person to keep track of the numbers on up to 54 separate cards.

One woman described the appeal and even addictive quality of Bingo. “It’s like a disease.” At the same time it’s an analgesic for the yawning emptiness of old age. “Bingo saves lives” she said.