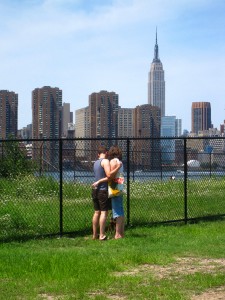 The long-awaited Brooklyn waterfront park is about to be opened to the public, though New Yorkers have complained that it is too late.

According to city officials, WNYC Transmitter Park will be unlocked this coming weekend. However, activists who have admired the scenic park through the fence for over half a year are disappointed.

“The park looks great, but the city messed up… We’ve been staring through a fence for six months at a park that looks complete, and now we’ve already lost most of this summer to use it.”

The city argues that the park was completed only a few days ago. Last Thursday saw some of the last safety railings installed along the East River shoreline. Restler, and others, believe the city got lazy, pointing out that the opening day was announced as soon as The Post began looking into the source of the unbelievable delay.

“The city just needed a real kick… Whatever work was done the past six months could have been done in weeks” he said.

The neighborhood’s frustration stems from more than just the waterfront park’s slow going; the Bloomberg Administration promised North Brooklyn residents around 50 acres of parkland- which have yet to be delivered. In the meantime, thousands of high-rise apartments and corporate buildings have sprung up along the Williamsburg and Greenpoint waterfronts.

Still, the park will undoubtedly please many of the area’s residents. Covering 1.6 acres, the park features lush green lawns, an esplanade, children’s playgrounds and gorgeous views of Manhattan. In the future, the park will also include a recreational pier, as well as a rooftop cafÃ©, public restrooms and possibly even kayaking.