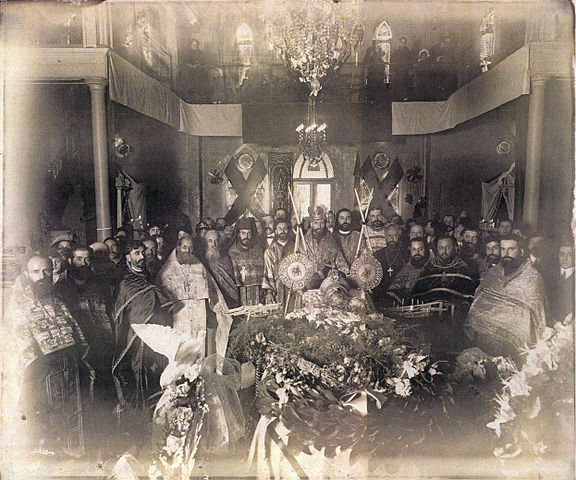 At the turn of the 20th century Raphael Hawaweeny helped to build the US branch of the Eastern Orthodox Church. An immigrant from Syria, he is now known as St. Raphael of Brooklyn and he died 100 years ago.

This past Friday evening the icon of this saint was decorated with white and red bouquets and carried through the opulent St. Nicholas Antiochian Orthodox Cathedral in Boerum Hill to mark the occasion of the centenary of his death, the Centennial Jubilee of the Falling Asleep of St. Raphael of Brooklyn.

One parishioner, Al Rahey is proud of his association with St. Raphael and his church:

Raphael was born in 1860 in Beirut to a couple from Syria who were escaping the massacre of Christians in Damascus. In 1895 he came to New York to take charge of a new Syrian Orthodox congregation forming in Lower Manhattan. By 1902, as the Syrian population grew in Brooklyn the church moved there.

By the time Hawaweeny died in 1915, he was a Bishop, and over 4,000 people attended his funeral. In 2000 he was canonized at a monastery in Pennsylvania.

The icon of St. Raphael is a framed painting of him wearing a red-robe and a halo. It will be carried by the shrine at the front of the church, where one of his finger-bones is on display in a glass case. Mr. Rahey, who is also the caretaker, said this moment is a joyous occasion for him and his church:

“It’s something that we cherish because he founded our church” he said. “Who knows if he didn’t found it what it would be like?”