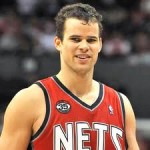 The Nets seem to be hoping that shelling out large sums of money will bring in the wins. That’s the pattern that is emerging, at least, as they’ve just hit a whopping $330 million in signing expenses. Kris Humphries, he of the Kim Kardashian fame, signed a two-year deal worth $24 million.

Humphries’ signing means that the Nets are spending more than $80 million in salaries for next season alone, a figure that is one of the highest in the Eastern Conference.

As Humphries agent, Dan Fegan, told the New York Daily News, “Kris is really excited to be playing for the new, cool team – the Brooklyn Nets.”

They appear to have intentionally given Humphries only a two year contract, allowing the Nets to avoid some of the higher penalties when punitive taxes start in the 2013-14 season.

At the moment at least, Humphries has managed to impress during a season that was filled with a great deal of turmoil for him. He averaged 13.8 points and 11 rebounds last season, amidst his tabloid filled marriage days to Kim Kardashian and the reality TV shows that he appeared in.

The Nets are banking on him continuing to keep his head in the game, even as he has a potentially messy divorce case with Kim and an ex-girlfriend currently claiming that she is pregnant with his child.

Looks like Humphries could afford a time out from his love life to concentrate on making good on this amazing deal he just signed.