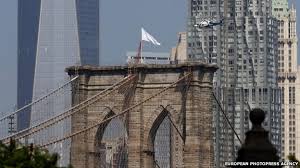 Once again the security of the Brooklyn Bridge has been compromised. In what is the second incident of its kind, and according to police one of the most stunning security breaches in New York’s history, vandals somehow managed to climb both towers of the bride, remove the American flags that were flying there, and replace them with faded, white flags. The incident occurred on Tuesday, in the wee hours of the morning.

The police have the license plate numbers of every one of the 1,800 cars that crossed the bridge within one hour of the moment the lights went out on tower one, 3:29AM, and are using all their resources to match a plate number with a suspect.

It is believed that between 4-5 intruders were involved, in two groups, one group per tower. They needed to somehow climb each of the bridge’s 276-foot towers, while remaining undetected. A key to their plan was to cover the floodlights which are usually fixed on each of the flags so that no one would notice the activity on top of the towers. The lights were cleverly covered with disposable aluminum lasagna pans tied on to the poles with zip-ties. At 3:29AM the first light was blacked out, and 13 minutes later the second was darkened as well.
The police have called in detectives from Manhattan’s Sixth, Seventh, Ninth and 10th precincts, as well as investigators from homicide, counterterrorism, intel and transit to help with the investigation.

Two years ago a similar incident took place in which the flags atop the two towers were stolen. No one was ever apprehended in that incident.