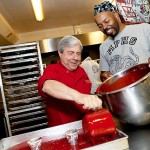 If you’ve never been to see the Cakeman, or to eat his signature red velvet cake, you certainly should. The Fort Greene baker called Cakeman Raven, but whose real name is Raven Patrick De’Sean Dennis 3rd, is working on getting into the Guinness Book of World Records with his velvet cake.

At the end of the week, he’ll bring his prize — the world’s largest sculpted cake — to Indiana for the 110th anniversary celebration of Kappa Alpha Psi. The 600 square foot red velvet cake is supposed to feed 15000 people at the celebration. Cakeman Raven explained his motives when he said, “It’s going to be a massive cake, so why not compete for a record while I’m doing it? Just like when somebody’s in the ring fighting, the more medals you have, the bigger the following’s going to be.”

Cakeman and his associates have been quite busy. They’ve kicked off the week long baking process in Cakeman’s East New York warehouse as a dozen people are using eight ovens to bake the cake one layer at a time. He wanted to make the cake at home rather than making it in Indiana because he said that the red velvet just wouldn’t be the same if it were made outside of Brooklyn.