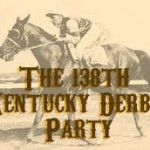 There is certainly some wacky fun to be had in Brooklyn, and one example of this is the recent celebration of the 138th annual Kentucky Derby that the Bell House enjoyed. An event space in Gowanus, The Bell House celebrates the Kentucky Derby in fashion each year.

On May 5th, their all-day event included ice cream by Van Leeuwen ice cream, $6 Maker’s Mark Mint Juleps and more. They had square dancing that was led by David Harvey & NYC Barn Dance. They offered prizes for best formal hat, best informal hat and runners up. In the evening, on their big stage, they had Live Band Karaoke with Bunnie England and the New Originals with trophies offered to the most inspiring performances.

Some of the more inspired attendees included Louisville native Brent Van Dyke who was awarded with the best dressed award. He arrived in his $50 Colonel Sanders suit. Brett Gustafson wore his seersucker blazer, matching blue hat and white oxford. Daniel Donnelly arrived in his uncle’s Lilly Pulitzer pants from the 1950s.