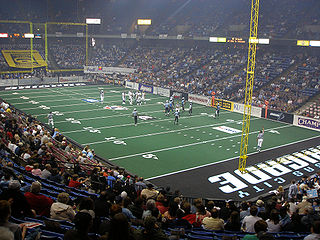 After a ten-year hiatus, New York once again has a team in the National Arena Football League. Just in case you have never heard of “arena football,” here is a short description: played on an indoor field only 50 yards long and 28 yards wide, that game moves fast with relatively high scores achieved each game.

Called the “New York Streets” the team is Brooklyn-based but plays their home games at the Westchester Counter Center in White Plains.

The team is not the NFL, but it doesn’t mean former NFL guys aren’t participating. For instance, Streets quarterback David Legree, a Brooklyn native, played for the Kansas Chiefs and the Indianapolis Colts.

“I’m homegrown. So, you know, I live at home. Me and my wife and my two girls. We live at home and we enjoy it every single day,” Legree said.

Another Brooklyn native, Corey Galloway, owns the Streets. He explained that it took him three years fo plan and develop the New York franchise. The started in April 2019 and has 24 players. The team has its offices and practice location in Brooklyn.

Ten years ago New York had an arena football team known as the Dragons. They played for eight years at the Nassau Coliseum on Long Island.

Galloway asserts that this new incarnation of arena football in New York as a more urban feel.

The Streets will be playing their next home game on July 21st. Playoffs scheduled to commence in August.