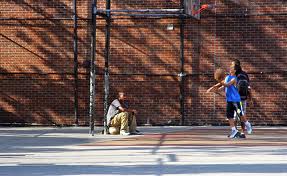 Sometimes we just have to own up to our own problems – rather than running around seeing who we can sue next. It’s a disgrace when someone attempts to cash in on an accident that clearly wasn’t anyone’s doing.

Perhaps Dion Richardson will listen up, as he is suing the city of Brooklyn for millions of dollars. Why?

Because he broke his knee after landing wrong playing basketball at Middle School 51 in Park Slope in 2010.
As he explained,

While there is a small, inch-deep, two-by-two inch wide gap in the wooden basketball court at the school, the city says that the mishap didn’t happen close to it. Richardson is claiming, of course, that all of his dreams have now been dashed since he’s had surgery, months in a cast and a second procedure but thinks his leg is still “messed up.”

While arguing that his professional dreams have been dashed, he then admitted that he played in less than a dozen organized games…in his whole life. And he was in eighth grade when the accident occurred during a first-period pickup game.

Is it a shame that the boy was injured? Of course. Should the school be liable for his medical expenses should it be proven that he fell in the whole that they’ve failed to fix? Perhaps. But should they be liable for breaking his dreams of going pro? Definitely not. Move on Dion – make Brooklyn proud by staying in school and finding a profession, rather than ambulance chasing.