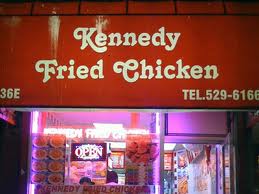 Abdul Haye is declaring war against those he sees as encroaching on his business, his name and his well-earned reputation. The owner of “Kennedy Fried Chicken” is 38 years old and has been working in the fried chicken business since he was 17, when he began as a chicken fryer, not long after he arrived in the US from Afghanistan.

Notwithstanding that the prominent initials were the subject of a copyright battle back in 1990, which was lost by a different Kennedy Fried Chicken owner; Mr. Haye refers to his own rivals with as much disgust as when he talks about the Taliban.

Mr. Haye remarked that, “I’m declaring war against all the Afghans in New York who have stolen my name and my idea.” He has his own five outlets, but there are at least another 300 across the country using what he believes is his own brand name. In 2005 he was awarded a trademark certificate from the US Patent and Trademark Office in Washington, and he says he will sue those usurpers unless they cease and desist from using his rightful name.

“Their poor-quality chicken is going to kill my reputation” Mr. Haye complained. “I am the only real Kennedy!”