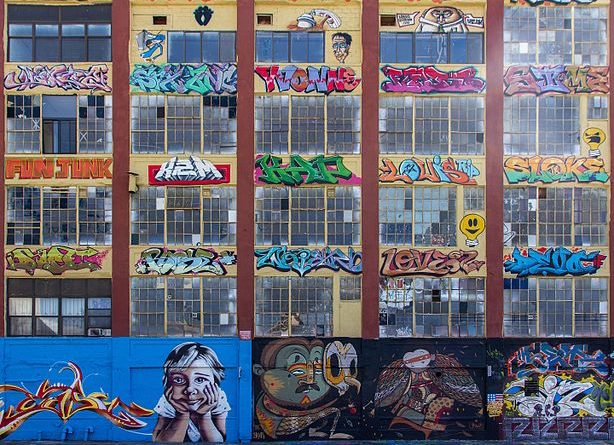 A jury found owner of the 5Pointz complex in Long Island City, Queens, guilty of destroying graffiti art when he tore down the building as part of his plans for developing the area.

Three years ago, Jerry Wolkoff, a New York City real estate developer, had the 5Pointz group of buildings torn down after close to twenty years of allowing graffiti artists to decorate the buildings with colorful swirling murals. The unusual collaboration became a tourist site over the years, and helped to transform the area into a growing residential enclave. Although the site was a popular attraction, and many graffiti artists added their own works frequently, it was always understood that eventually the buildings would be torn down to make way for luxury apartments.

After the demolition in 2014, 21 artists brought a law suit against Wolkoff, arguing that he had violated the Visual Artists Rights Act, a law enacted to protect public art of “recognized stature” which was created on someone else’s property. Eric Baum, lawyer for the artists, said that Wolkoff had violated the artists rights by failing to notify them 90 days in advance of the destruction. According to the complaint, Wolkoff had brought workers at night to cover the graffiti in a layer of white paint without giving notice.

David Ebert, Wolkoff’s lawyer, said that the VARA law does not apply in this case, since the law was intended to protect art and not his client’s building. He added that the artists always knew that one day the buildings would be torn down. He also argued that the artists themselves had destroyed much more art than his client did, saying that over the years about 11,000 murals had been painted and destroyed at the 5Pointz complex.

The trial lasted about three weeks. At the end the two lawyers agreed that the jury’s decision would be merely a recommendation to guide the judge, Frederic Block to make his decision. The jury decided in favor or the artists, but Judge Block requested that both sides hand in court papers in the next few weeks discussing the validity of the verdict. After he reads and considers the papers of both sides will he decide the outcome, including if Mr. Wolkoff will need to pay the artists damages.

Although the judge is handling the jury’s decision creatively, Mr. Baum still claimed a win for his clients, saying:

“The jury sided strongly with the rights of the artists. This is a clear message from the people that the whitewashing of the buildings by its owner was a clear and willful act.”